Jonah Panikar graduated from Franklin High School in 2014 and was a part of Franklin’s Mock Trial team while he was in high school.

“My favorite memory of mock would be opening in county finals in Baltimore. It was  Mr. Lambert’s first year with us and nobody expected Franklin of all schools to be there.” – Jonah. 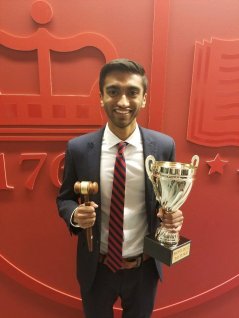 How has Mock Trial Helped Him?

“What has mock helped me with? It’s pretty simple for me, it’s changed my life. I’ve found my passion for the law and adore trial work. I still do mock, at Maryland now, but my success here is derived from the things I learned back then. Appellate work, trial work, legal research, all of the things I’ve learned over time started with late practice in Mr. Lambert’s classroom.” – Jonah.

What’s He Up To Now?

Jonah attends the University of Maryland at College Park. He is a senior double major with majors in Government and Politics and Finance.

What Are His Plans for the Future?

Jonah plans to attend law school and is looking for a career in the U.S. Attorney’s Office.